I'm talking about being a book snob. Not that I am, but I've been there - stuck my toes into the shallow end as it were.

When all the 'cool' kids were reading Harry Potter. No thank you, I said. It's a children's book and I, I am a teenager (almost a twenty-something, in fact). It is beneath me. Okay, thanks to the wonderful blogging community - and always being told to read those books - I have now had to eat my words. I'm over twice the age the main characters are in the first book and you know what? I had fun reading it.

What, is that the only time this happened to me? Nope.

Did you know by now that I love fantasy books? Well, I do. Fantasy's my favorite genre. My go to both for times I need something comforting and for times I want my world shaken up a little. However, and even though I saw the movies, I never read The Lord of the Rings books.

Well, thinking that every proclaimed 'fantasy fan' should read what is arguably the most well known fantasy series (and the one that's the granddaddy of the genre as we know it today) at least once in their lives. So, about three years ago I picked up The Fellowship of the Ring and started reading.

You know what? I didn't like it. It was too wordy for me and too much of a boys club.

Both these books have helped me to not be a so called 'book snob'. I read what I want - regardless of if it's a well-known best seller or a 'eh? what's that?' kind of book.

Okay, this prompt this week really got me thinking. To be honest with you, most of the books that really stand out as 'loved it' in my mind, I've already read other work by the author. In fact, going through my Goodreads list to help me compile this list, I discovered that there are very few books that I've read as the single work of the author, that gets a three star or higher rating from me.

Honestly, I am amazed at how many twenty-somethings (and older) read a lot of young adult books - in fact, some almost exclusively. When I was an actual 'young adult' (as defined by the YALSA being between the ages of twelve and eighteen) I didn't know what 'young adult' was. I would have summed it up as those Buffy the Vampire Slayer tie-in novels. I seriously had no clue what it was.

Only after I reached my twenties did I discover what young adult as a demographic meant. And I had hit my mid-twenties before I ever read any young adult directed books. According to this wiki article, they say that young adult authors and readers define the age group as sixteen to twenty-five. In fact, if the article is to be believed, only 45% of young adult fiction is actually purchased by readers under eighteen.

Personally, I enjoy reading YA books for the same reason I like any books. Likable characters, good story, well written. All those things. However, YA is rather nice because it doesn't often suffer from long winded prose and a plot that moves slower than molasses in January. (As some adult directed fantasy novels are wont to do.)

Also, I've been lucky in that most of the YA books I've read are a bit cleaner (in terms, specifically, of crass language and even some sexuality) and I do prefer cleaner books as a whole. To put it in terms of movie ratings: I always choose PG13 over R.

Leave me comments, please, as I would love to hear what you think about YA. 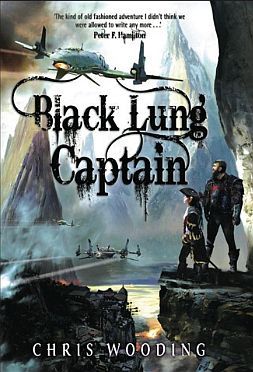 
Darian Frey is still reeling from his last failure (stealing from orphans - or rather, not stealing from orphans) when the promise of riches beyond measure practically falls into his lap. So what if to reach it he has to drag his crew to a place where few ever return alive? So what if he is forced into partnership with a man even less trustworthy than he?

Have you ever bruised your finger? I did, and let me tell you, it's not fun. My poor little pinkie turned funny colors and puffed up. However, it did give me this idea for a topic, so maybe something good did come from it.

I don't like characters in the books I read to die. It's that simple. If it's a good, meaningful death, I won't complain about it - but anything less and the book pretty much killed itself in my eyes. This is very odd, considering that I used to read nothing but murder mysteries.

It seems that in mystery novels though, more often than not in the ones I read, the more villainous person was the victim. Usually it was a really vile character that got killed first. Sometimes you could even sympathize with the murderer (though I probably shouldn't be saying that).

Then, once I started reading fantasy novels, I realized how often likable people were killed in the worst ways possible. I can deal with death - even if they kill off my favorite character - as long as it's meaningful. It seems that, entirely too often, death is just a shorthand way to say that battle/war sucks. I guess it could be there to be more realistic, but I've never really needed my reading to be realistic.

One of my favorite fantasy series ever left everyone alive at the end of the story. Of course, they weren't all exactly 'whole' by that time. One character lost his arm, from the elbow down I think. Actually, two characters lost one arm each, but the first one got a really cool knife prosthetic. Another character lost an eye.

For me, I really liked the way that trilogy handled it. Yeah, it was a difficult fight - but everyone was still alive and, even if not 'whole', doing fine.

So, what's your experience with death and injuries in books? Does it bother you? Do you like it because it's more realistic? I'd love to hear your thoughts.

I am actually going to limit this to only - or at least, close to - high school aged people. (Okay, the rule of thumb that I am using to compile this list: one of the main characters in a YA novel - automatic pass.) As much as I would want to have some of my favorite characters at my lunch table, they aren't teens in the book. So…

(Please note: I own none of the pictures. Where available, I went with the picture that the author approved of. If not possible, I went with...Well, a picture I like of the character. (Also, oddly enough, we started with books popular enough to have fan art and then started in on the books that weren't.) Or and actor that I think could play the character - or simply what I think they look like.)