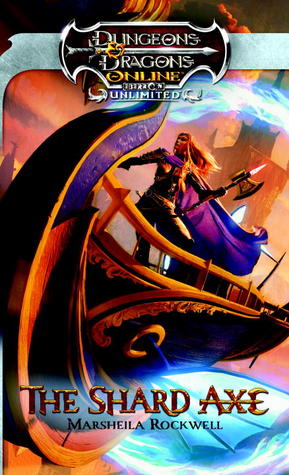 Sentinel Marshal Sabira d'Deneith has been hired to defend the dwarf that she holds responsible for her partner's death years ago. But, during the course of is trial, she discovers that the past doesn't always stay in the past.

Honestly, I'm not sure why we're supposed to like Sabira. She's completely unrelatable and rather unlikable. So much of this plotline hinges on what happened in her past. However, I was never interested enough to know and, when I did finally find out about halfway through the book, I really didn't care. She was just so sure that she was always right and she really felt as though she was supposed to be this hard-nosed, tough, strong and sexy woman - and yet all I could buy was that she was a little brat that pouted when she didn't get her way and -  really - was only a good fighter because the story said she had to be.

The plotline itself is rather weak. Basically, as a Marshal, Sabira gets to play lawyer for a dwarf that is accused of thirteen murders. Honestly though, it took until after the halfway point for that plot to show up. Prior to that it was just unimportant fight after unimportant fight. The resolution to the mystery was pretty obvious right from the start and the resolution to Sabira's problems felt very fake. (Please note: I do love the Eberron setting. It's simply awesome, so I did have foreknowledge about this world and what type of stories to expect. I also did discover that a hybrid legal thriller and fantasy jaunt just doesn't work for me.)

Read as part of the following challenges: Book Bingo & Lucky No.14
Posted by Unknown at 10:32 AM