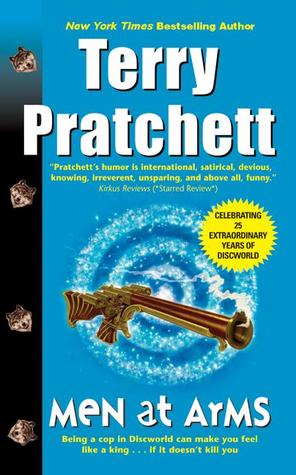 The city of Ankh-Morpork works - due, in majority, to the efforts of the Patrician. They have guilds, see. Assassins Guild. Thieves Guild. They even have a Fools Guild. But what they didn't have was a king. It was thought that the royal line died out when Lorenzo the Kind was beheaded. However, there is a certain man... A man that is part of the much maligned Night Watch in the City Watch. A man that was raised as a dwarf - albeit, a very tall one. A man that is none other than... Corporal Carrot!

Quote:
'Add 'em up and divide by two and you've got two normal men, except normal men don't join the Guard.'

Discworld is something of a parody for all the normal fantasy tropes. And those have been shaken up and put in a blender. I was on the slow side getting involved with the series - seriously, I called myself a fantasy fan and I hadn't read the most well know humorous fantasy series ever. I couldn't even give the defense that I didn't like funny fantasy books, because I sure prefer them over the serious and dark ones.

This is the second book in the 'inner-series series' of Discworld's City Watch - the brave men that keep the streets of Ankh-Morpork save for the innocent civilians. Or something like that. In this book, thanks to the events of Guards!Guards! (which, if you want to get involved with Discworld, would be a great place to start) we get several new recruits, all joining up to cover the 'minority' problem the guard has been having.

You see, apparently the Watch had been entirely populated by white male humans up til now. Joining up, we have a dwarf, a troll and a woman. First thoughts on that 'Oh, good, the Night Watch now has a female'. Ever since reading Guards!Guards!, I've liked the community feeling of the Night Watch. It had been a very small group, and the people didn't always get along but that made it all the more fun.

The plot was about like it always is in these novels, with so many things all going on at once that you cannot see how they will tie up by the end. But, oddly, tie up they always do - usually with many improbable events always drawing just the right people together for the finale.

There were several things in this book that made me chuckle, but it honestly didn't seem as humorous as the others in the series that I have read. That might possibly be because two of the characters that I find the funniest - the librarian and Death - didn't have very large roles to play in this novel. When they were around though, it was always good for a laugh.

A few other things that I must mention:

The first time I've ever heard of a dwarf abode being handled realistically. I mean, really, if dwarves are so short, why would they build to human specifications?

I loved the way trolls were depicted and especially troll and dwarf dynamics.

These books are some of the only (if not the only) to really capture the way a lot of people talk. Seriously, me and my family are always using terms like 'thingy' and 'what-cha-call-it'. Many, many people in this book do that, and for me that was very entertaining.

Pros:
Cons:
Read as part of the following challenges: Book Bingo
Posted by Unknown at 1:34 PM