Mini-Review: A River in the Sky by Elizabeth Peters 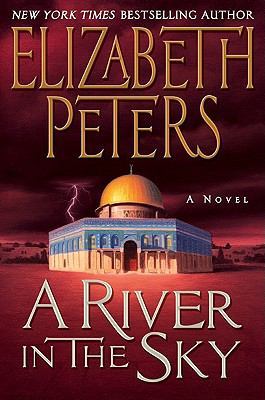 A River in the Sky by Elizabeth Peters
Series: Amelia Peabody #19
Published by HarperCollins
Pages: 307
Genre: Historical/Mystery
Add on Goodreads

Set during the simmering tensions of pre-world war one Palestine. Into this melting pot we throw Ramses, working for an American archaeologist, and the rest of his family, on the hunt of an amateur archaeologist suspected of being a German spy.

Quote:
Ordinary villains are one thing; religious rioters and spies of various nationalities are less predictable.

This is actually quite a different Amelia Peabody and Co. mystery than usual. We've traded in the usual Egypt for Palestine. There is less archaeology and more spies. There is also a good deal more narrated from Ramses' point of view than all except the chronologically newest books. I have heard some people being a little upset by all this, but it was honestly very timely for me. I loved the spy aspect in this story and how well it ties into Ramses and David's characters.

I really only had two, very small, problems. One was that I wished the characters had been all together for more of the book. They were split up for a good portion of it, the story being told both from Amelia and Ramses point of view. Also, my other complaint would be that I missed Egypt. I do understand why this story wasn't in Egypt, but it's obvious that no one - not the characters and not even Ms. P. herself - is as interested in Palestine as Egypt.

Read as part of the following challenges: Book Bingo & Series Challenge & Key Word & Lucky No.14
Posted by Unknown at 2:01 PM